The Combined Cadet Force is a national organisation, which exists primarily in schools. It exists to give its members military skills, adventurous training and qualities of leadership within the safety of a formal and controlled structure.

It is possible to have sections from all three major arms of H.M. Forces: the Royal Navy, the Army and the Royal Air Force. At Abingdon we have an Army Section and an RAF Section. Which section you join is entirely up to you and is a decision which will be made during the Recruit Training Camp in the Easter holidays of your first year of membership. The CCF is jointly financed by grants from the Army and termly subscriptions from the boys.

The broad function of the Combined Cadet Force is to provide a disciplined organisation within a school so that boys may develop powers of leadership by means of training, to promote the qualities of responsibility, self-reliance, resourcefulness, endurance and perseverance, and a sense of service to the community. It is firmly believed that the self-confidence and self-discipline required in Service life are equally important in civilian life.

The specific function of the Service training in the CCF is to:

How things work at Abingdon 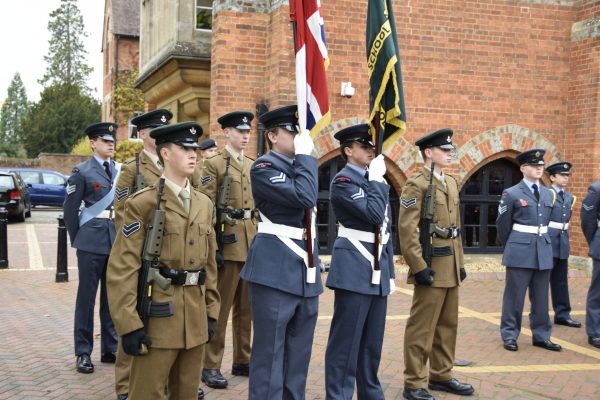 The CCF here is completely voluntary. Since each member of the CCF receives much training and equipment, we require boys to stay with us for at least one year and preferably until they complete their proficiency training after two years. Although joining the CCF is voluntary, as a member you will be expected to attend every parade. The programme of activities is progressive and this is not viable unless attendance is consistent.

It is your responsibility to regularly read your school email to check what is going on. Each week you will receive an “orders” email from the senior cadets indicating the programme for that week’s parade including what you should wear and where you will meet.

As with every successful organisation, there are rules and regulations, which have to be observed. In the CCF you will rely heavily on your common sense and you can expect there to be repercussions if you fail to meet the expected standards. The CCF is a military organisation; serving Regular Officers and NCOs visit us and we visit Regular units and training areas. Cadets are expected to keep their hair short and tidy, off the collar and above the ears. Normal school sanctions along with “dress parades’ will be applied as deemed necessary.

The CCF at Abingdon meets regularly every Tuesday during term time from 3.45pm. until 5.15pm. Along with this, Third Year cadets will also train on a Tuesday lunchtime. These times are carefully chosen so that games sessions do not clash with them. If any boy has another activity, which happens at the same time as CCF, then the difficulty can usually be overcome by negotiation. There is no need for any boy to feel that membership of the CCF will prevent him from doing any other school activity. Nevertheless, you should feel a commitment towards your CCF activities, and will be well rewarded for consistent effort and attendance.

Air Experience Flying sessions are arranged on weekday afternoons, on a rota basis throughout the year. Military exercises generally take place on activities weekends and camps take place during the main school holidays. Cadets are expected to attend Easter Camp in Third Year and at least one camp a year as part of their training. 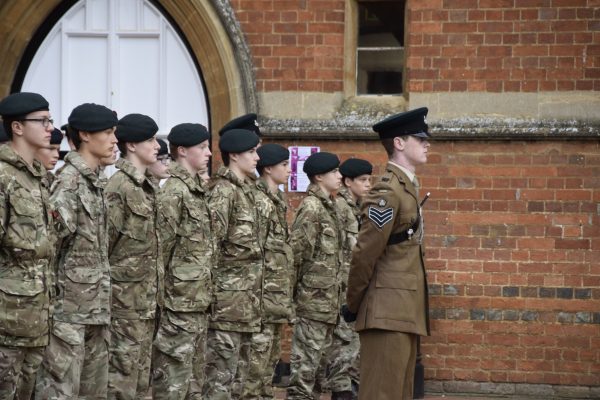 When you join the CCF you are classed as a recruit. Recruit Training is compulsory for 1 year. Your first termly subscription of £75.00 will provide you with boots, t-shirts and various other items that are not supplied by the MOD. All other uniform is issued for the duration of your membership in the CCF and can be replaced if worn out or outgrown at no charge. If losses occur or if items are not returned when leaving CCF parents may be charged for them.

Uniform must be worn for each parade and so this has to be ordered before the Michaelmas term. For this reason we ask that your first subscription is added to your first termly bill. Subsequent termly subscriptions will also be collected by means of the end of term bill and are currently set at £50.00. Uniform is an important part of cadet service life: it gives you a corporate identity, and a sense of belonging.

Once your application form has been received and a place has been allocated to you, you will be sent further information.

We aim to provide all CCF activities during the term, including weekends, at no extra cost. Additional cost is normally only incurred if a cadet attends longer camps at Christmas, Easter or Summer, or if they attend the annual contingent formal dinner. The CCF prides itself on offering exceptional value for money in all that it does as well as exceptional opportunity in its activities.

Initially, recruits joining the CCF are paraded and trained separately from the Army and RAF Sections. You will follow a common core syllabus regardless of which section you eventually wish to join, studying Skill at Arms and Shooting (weapon training and range firing with the 0.22 single shot rifle and the Cadet A2 GP rifle), Drill, Map and Compass, Military Knowledge and Fieldcraft.

Recruit training will include the following compulsory events: One field day in each of the Michaelmas, Lent and Summer terms and Recruit Camp during the first week of the Easter holidays. At Recruit Camp there will be a ‘Passing Out Parade’ to which your parents will be invited, where you will formally pass out into the Army and RAF Sections. Failure to attend Recruit Camp may not allow you to complete your recruit training, however you will remain in the CCF until the end of the Summer term after which you may be asked to leave.

In the Summer term recruits then become cadets in either the RAF Section or the Army Section, under the control of their respective Senior NCOs.

What do you do in the CCF? 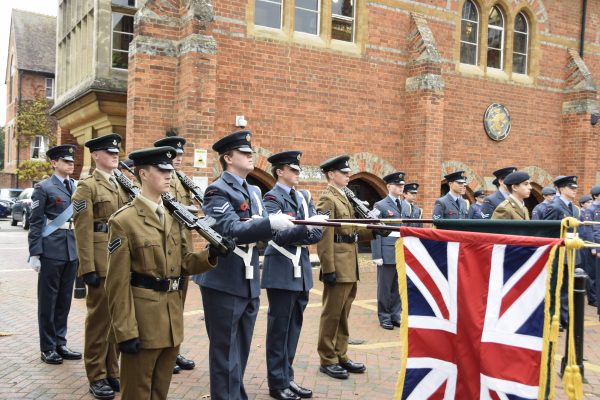 Some of the training is common to both the Army and RAF Sections. As a general rule, cadets follow special to arms training relevant to their sections but overlap, e.g. RAF cadets can attend the Advanced Infantry Cadre at Easter if they wish.

In every term there is a field day, which might involve a visit to a military base or other military training such as range days, where cadets can experience full-bore shooting. Weekend exercises, open to both sections, allow cadets to practise their skills in leadership, navigation, fieldcraft and military tactics.

And for the RAF Section:

As you can see from this outline, we offer plenty of variety. Opportunities will increase as you get older and more experienced.

In addition to the skills learned as a recruit, cadets are taught at different levels of a broad syllabus; this includes shooting, drill, method of instruction, signals, first aid, leadership training and advanced infantry skills. Cadets can also qualify for a variety of courses including the Cadet Training Centre (CTC) Frimley Park Cadet Leadership Course. Exceptional Cadets may be put forward for the Rocky Mountain Leadership Course in Canada.

At the end of the Summer term there may be the opportunity for the members of the Army Section to attend a fieldcraft based camp. This provides an excellent opportunity for further practice of the skills learnt throughout the year.

In addition to the skills learned as a recruit, cadets are taught at different levels of a broad syllabus; this includes shooting, drill, methods of instruction, communications, first aid, leadership training, aircraft recognition and airmanship. Shortly after joining the RAF Section, you will be given an opportunity to fly.

Each year the RAF Section enters a team for the RAF Air Squadron Trophy Competition, where we have been very successful in the past.

Cadets may be selected to attend the Air Cadet Leadership Course. The Air Cadet Organisation also has its own Adventure Training Centres in the Lake District and North Wales where various courses are offered.

Cadets can also qualify for Air Cadet Pilot or Navigation Courses. If selected, you could be awarded ten hours training, which will count towards a private pilot’s licence. Gliding Scholarships, Army training courses and competitions are also available.

There is also the International Air Cadet Exchange for exceptional Cadets. Countries across Africa, Asia, Australia, Europe and North America participate in the scheme.

In Summer holidays the RAF run camps on RAF bases in the UK, and sometimes in other countries. Camps offer an excellent opportunity to sample RAF life, join in with adventure training, gain work experience, shoot and fly in a variety of aircraft.

Boys who decide to join the RAF Section at the end of term two will be expected to obtain a pair of RAF pattern black shoes. These, like the boots, are not supplied by the MOD so the cost of these will be passed on to parents.

Great to have three new corporals in the L6th. Congratulations! https://t.co/Cw68ULm8VI

The cadets had a great experience on a proper obstacle course during the Biennial Inspection. https://t.co/FC10tOuaWA