At Abingdon we aim to teach and develop the resources, skills and resilience that students need to feel confident in embracing their future. We encourage students to seize opportunities and to appreciate their responsibilities to each other and to society as a whole. The School promotes a culture of mutual respect and equality and we celebrate diversity.

Abingdon enjoys the very best in academic standards, music, sport and the arts in a caring and supportive environment where students are motivated to succeed. The health and wellbeing of our boys is paramount and the School has a comprehensive pastoral care system centred around a boy’s tutor and housemaster.

The School is situated in 35 acres of beautiful grounds in the centre of Abingdon, just south of Oxford. There are around 1000 boys at Abingdon and a further 250 boys at the Prep School, which is based just a few miles away at Frilford.

of all A level passes were A* grades

of all A level passes were awarded A* to B grades

We are one of only a few schools to have physical houserooms for both dayboys and boarders, so there is lots of space for boys to be able to relax and unwind. Equally, we are proud of the fact that although we are a big school, the pastoral care breaks down into small units, with tutor groups of between 10 and 12 pupils per member of staff, so that every boy is known and cared for.

The School combines over 750 years of history and tradition with a modern outlook. As well as encouraging academic achievement, with impressive results at GCSE, A Level and Oxbridge and university entrance, the School provides extensive extra-curricular opportunities which broaden horizons, promote a global outlook and build the skills needed for the workplace. We encourage pupils to try something new, to develop existing talents and to ‘give something back’.

countries visited in a typical two years by students

Our aim is to ensure each boy thrives at Abingdon and, through challenge and opportunity, achieves the most from his potential. Our pupils come from a wide range of social and geographic backgrounds, creating a lively and tolerant mix of cultures. Boys of all faiths are welcome.

The majority of our pupils are dayboys although boarding plays an important part in the character of the School. Close ties with the nearby girls’ school of St Helen and St Katharine adds a co-educational feel, especially to our Sixth Form, where some subjects are taught jointly and there is much collaboration with drama productions, musical activities and, of course, socially. 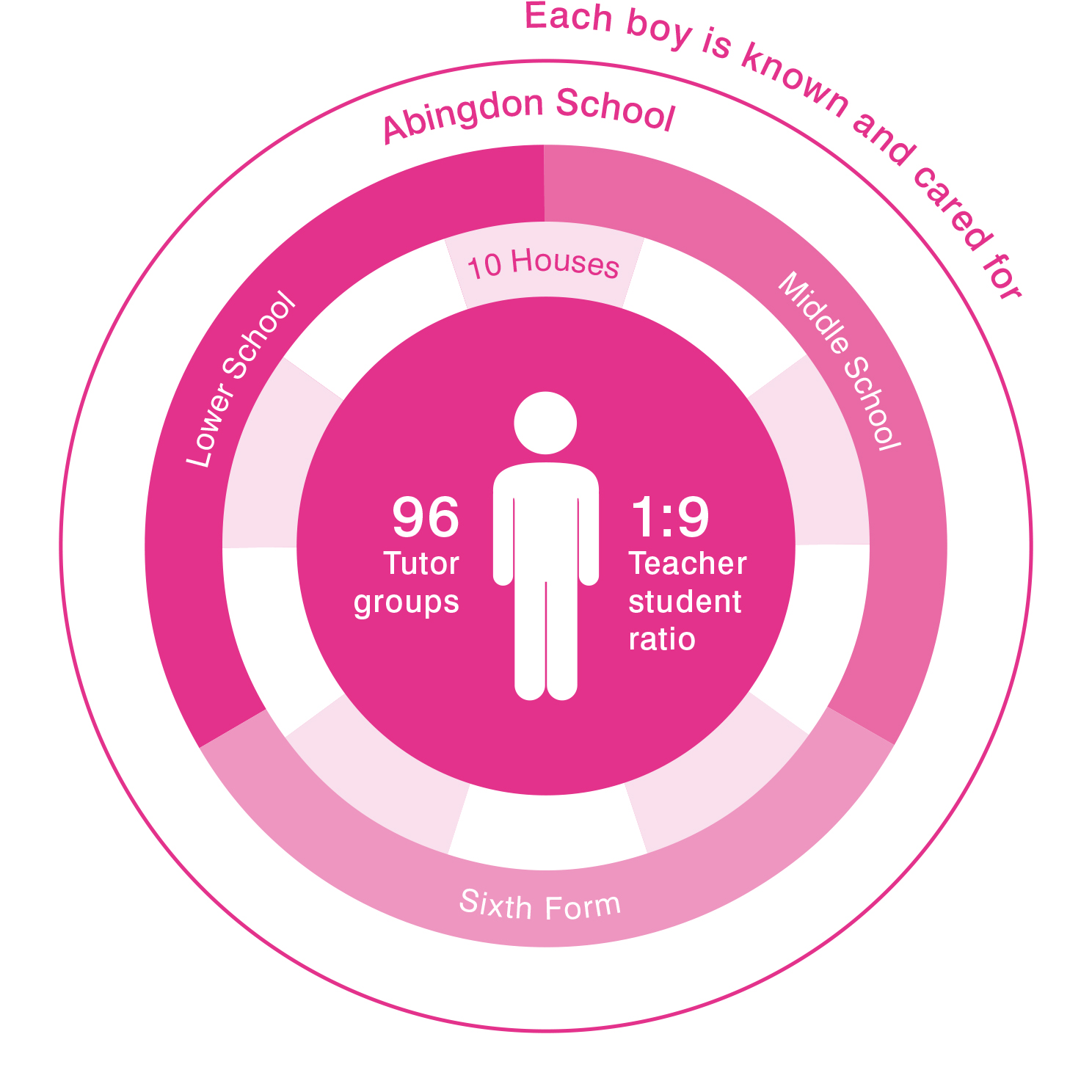 “There is a caring atmosphere throughout the school.”

Entry to the Lower School is mainly from maintained primary schools and independent schools which finish at the age of eleven, while the Middle School intake is predominantly from preparatory schools. In the Sixth Form there is a further intake of boys from the maintained and independent sectors.

The school day starts at 8.35am, lessons finish at 3.40pm and school buses depart at 5.20pm. Homework is set each day and the amount gradually increases as pupils move up the school. Wednesday afternoons, lunchtimes and 3.40pm to 5.20pm each day are devoted to ‘Other Half‘ activities – our extensive extra-curricular programme.

Every boy has his own individual timetable of work and activities which are supervised by his tutor.

If you would like to see video introductions to various aspects of school life such as boarding, the Other Half and our Sixth Form or take an online tour of the school through the eyes of some of our students then please follow this link  to our online open morning page where you can find lots of additional information.

Congratulations to 3rd Years Josh & Jeetu on their victory in the 'Supersized Stamp' competition to mark the #PlatinumJubilee @RoyalMail https://t.co/jjDDcLMXWx

@AbSchCricket Thanks to everyone who offered advice. I had a very enjoyable afternoon watching the 5th XI edge to victory in a nailbiting match: 3 runs in it... Many thanks to Stowe for hosting the fixture.

Having read this, I'm looking forward to my debut as a cricket umpire tomorrow when I will accompany the @AbSchCricket 5th XI to their fixture v Stowe. All tips/advice gratefully received... https://t.co/nFbkpHA0Nv

A culture of consideration and kindness

96 tutor groups - each boy is known and cared for

An Introduction to Abingdon
Meet the Headmaster